Albatross - Wings of Freedom - The Story

This magical musical delves deep into African history, exploring many different aspects of slavery and freedom. It intertwines mythical folklore with historical fact and emphasises the importance of redemption and forgiveness.

Set in the late 1880s in Zanzibar, East Africa, this musical tells the story of the epic struggle to eradicate the black market slave trade, being perpetrated along the East coast of Africa.  Inspired by the true story of Bishop Charles Smythies of Zanzibar, we follow the church’s mission to end slavery. In collaboration with the Royal Navy and a passionate and dedicated group of local people, they capture slave boats, free the slaves and bring the reprimanded traders to justice.

Although a historical piece, the themes of anti-slavery are as relevant today as they were over 100 years ago, with recent estimates suggesting there are over 20 million people living in conditions of ‘slavery’ throughout the world. This musical is dedicated to the continued struggle to stamp out this illegal practice, wherever it may be found, and to create a world where all can be free. 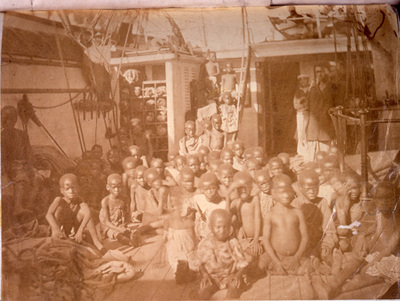 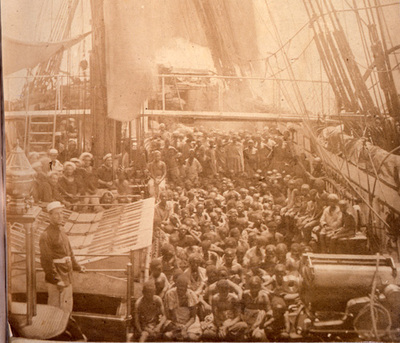 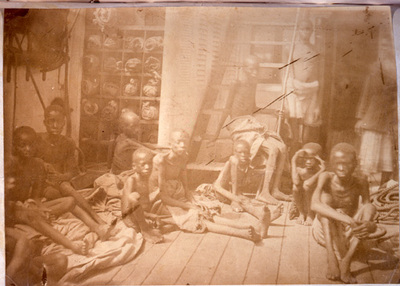 The ships and sailor of the Royal Navy that were situated off the West African Coast, during the 19th century, to prevent illegal trading in enslaved people, by seizing ships and blockading the coastline.

Download File
Throughout the story, John De Conquer united his people and fellow slaves through music, song and laughter. His songs about the strength of their souls and his cheerful attitude helped the slaves endure and they believed in brighter days.

It is said that when he walked, his footsteps sounded across the world in a low but musical rhythm, as if the world he walked on was a singing-drum. John the Conquer was notorious for his drum beat and when his people heard this, they knew that something better was coming. So they laughed in the face of things and sang 'I'm so glad! trouble don't last always'. This theme and music was heard only by those who suffered.

However, at one point in the story, John de conquer was able to make the slave owner 'Old Massa', laugh. This was considered impossible amongst the slaves. He spread laughter to others, irrelevant of colour or creed. He proves that deep down, all humans are the same and this is an essential aspect to living equal and free lives.

In 1882, on the death of Bishop Edward Steere, Smythies declined the offer of the Bishopric of the Universities Mission to Central Africa; but, after a year's fruitless search and many refusals, the committee of the mission renewed the offer to him, and he accepted the perilous charge. He was consecrated Bishop at St. Paul's Cathedral on St. Andrew's day (30 Nov.) 1883, and in January 1884 left for Stonetown, Zanzibar, the headquarters of the mission.

The diocese covered roughly thirty thousand square miles, and, apart from the character of the country and its climate, Smythies had to face difficulties due to the new colonial policy of Germany, within the sphere of whose influence nearly all the mission stations lay. From the first Smythies devoted himself to the selection and training of natives as clergymen, taking enormous pains to discover their vocation and to give them such mental and spiritual education as should qualify them to become the evangelists of their own people. He was equally careful to keep them free from that veneer of English civilisation which so often mars the work of native clergy in foreign missions.

He visited all the nearer stations of the missions every year and the remote stations once in two years. This involved five journeys on foot, performed for the most part without white companions, to Lake Nyasa, which is four hundred and fifty miles distant from the coast.

In 1888, with a view to the suppression of the slave trade, the coast of East Africa was blockaded by the combined warships of England and Germany. This led to much excitement and disturbance among the natives on the mainland. The situation became in fact so grave that the bishop was strongly urged by the English government to withdraw his missionaries from the scene of danger. This he not only declined to do, but he set out himself for the interior of the disturbed district to strengthen the hands of his clergy and their converts. The journey nearly cost him his life. The steamer on approaching the shore was fired upon, and a threatening crowd surrounded the house in which he took shelter. He was saved from violence by the goodwill and courage of the insurgent chief, Bushiri. In 1889 Smythies became convinced that it was impossible for one man to supervise the work of his vast diocese, and in 1890 he came to England to help to collect the endowment needed for its subdivision. By incessant travelling, speaking, and preaching, the sum of 11,000l. was raised in six months, the necessary formalities were completed, and the Rev. Wilfrid B. Hornby was consecrated as first bishop of Nyasa, a title afterwards changed to Likoma. On the division of the diocese Smythies's title was altered to Bishop of Zanzibar and Missionary-Bishop of East Africa. During his visit to England in June 1890 he was made honorary D.D. of Oxford University.

'I like being here with Padre Cecil Majaliwa very much' wrote Bishop Smythies. 'The religion of the people seems so real'. Of Majaliwa's pupils, no less than 6 later became priests and 2 became deacons. Yet, Majaliwa experienced strain and depression. He had forgotten his childhood language and was at first intensely lonely.
Here, you can download and read the book:
The history of the Universities' Mission to Central Africa, 1859-1909 by A. E. M. Anderson-Morshead